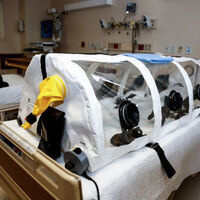 Morgan Shradar, began her career with Nebraska Medicine as an operating room nurse in 2000, Morgan quickly established herself as a leader in Nebraska’s most sophisticated surgery department. She stepped into a charge nurse role in 2007, nurse manager 2015-2019, Heading up surgery, pre-op, PACU, cardiac cath lab, interventional radiology and endoscopy, the depth and breadth of Morgan’s responsibilities are a testament to her capability and range.

One of her most notable experiences has been in serving the IDN’s state-of-the-art biocontainment unit, one of only a few nation-wide that recently treated Ebola patients requiring some of the most complex treatment regimens ever developed.

Morgan is currently a Clinical Coordinator for the Nebraska Biocontainment Unit.  She joined the biocontainment team in 2009 and participated in care of the patients transferred from Western Africa in 2014, along with the quarantined individuals in 2015 and most recently in 2018/2019.  She is a an educator with NETEC, ISQ and coordinated the drills and training for the NBU staff at Nebraska Medicine.

Morgan has had articles published in OR Manager, been interviewed for Nebraska Public Television’s coverage of Ebola and spoken at industry gatherings like the ANCC National Magnet Conference, World Congress Healthcare Supply Chain Summit, and various webinars. She received her Bachelor of Science in Nursing from the College of Saint Mary.

Science Cafés involve a face-to-face conversation with a scientist about current science topics and are open to everyone 21 and older. Each meeting is organized around an interesting topic of conversation. A scientist gives a brief presentation followed by a Q-and-A period.

Pizza will be provided for the first 50 people from the Nebraska Coalition for Lifesaving Cures.