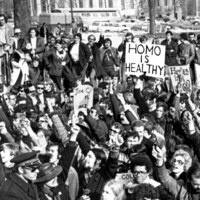 The UNMC/Nebraska Medicine LGBTQ+ Employee Alliance invites you to a special private virtual screening of CURED, co-sponsored by the UNMC Department of Psychiatry, the UNMC Office of Inclusion, and the UNMC College of Medicine Office of Diversity, Equity and Inclusion.

CURED has been described as “fascinating” (Hollywood Reporter), “riveting” (The Queer Review) and “astonishingly rich ... one of the best documentaries of this or any year" (British Film Institute). This award-winning documentary chronicles the battle waged by a small group of activists who declared war against a formidable institution — and won a crucial victory in the modern movement for LGBTQ equality. The film will be available to stream for registered particpants between June 12 - June 19.