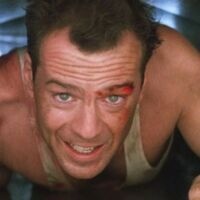 What happens to a body that falls 30 stories? And say you walk across a room of glass shards, how long until you bleed out? A special intro by Kacie Baum, University of Nebraska Medical Center - UNMC Events and Science Outreach Coordinator, will address some of the technical questions raised by John McTiernan's action masterpiece.

FILM INFO
It's Christmas time in Los Angeles, and New York City cop John McClane (Bruce Willis) has come to LA to visit his estranged wife, Holly. Out of his element at Holly’s office party on the 30th floor of Nakatomi Tower, McClane retreats to compose himself in the bathroom. And wouldn't you know it, just then the partygoers are taken hostage by a group of terrorists headed by the ruthless Hans Gruber (Alan Rickman). Unable to escape and with no immediate police response, McClane is forced to take matters into his own hands. Yipee ki-yay

ABOUT SCIENCE ON SCREEN
Film Streams is pleased to again join dozens of its national arthouse colleagues in Science On Screen®, an innovative series that creatively pairs classic, cult, and documentary films with lively talks led by notable figures from the world of science, technology, and medicine.

Science on Screen is an initiative of the Coolidge Corner Theatre, with major support from the Alfred P. Sloan Foundation.

You're not going yet!

Buy Tickets
This event content is powered by the Localist Community Event Platform.