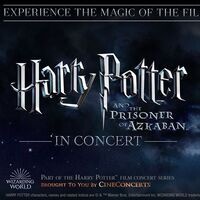 Omaha Symphony Harry Potter and the Prisoner of Azkaban™ in Concert!

Return to the world of Harry Potter with Harry Potter and the Prisoner of Azkaban™ in Concert! The Harry Potter™ film series is a once-in-a-lifetime cultural phenomenon that continues to delight millions around the world. Experience the third film in the series in high definition on our big screen while John Williams’ unforgettable music is performed live-to-picture.

With only two performances, you'll want to get your tickets before the seats disappear!

UNMC employees and students receive a 20 percent discount. Use code 'UNMC' when checking out.

Buy Tickets
This event content is powered by the Localist Community Event Platform.